If I Can Provide a Home, That’s What I Want to Do

Labors of Love: If I Can Provide a Home, That’s What I Want to Do

Sheena was surrendered in July of 2018. When she arrived at Berkshire Humane Society, she was nearly blind, overweight, and starved for affection. A vet visit revealed that the 5-year-old German Shepherd had Pannus, a chronic eye condition most commonly affecting Shepherds. 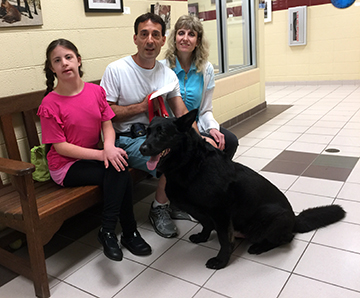 Pannus is an autoimmune disease that causes blood vessels and scar tissue to invade the cornea. Though easily managed, without treatment, the condition may cause blindness.

Thankfully for Sheena, her eyes responded quickly to medicated eye drops, and the cloudiness in her eyes began to clear. She also responded to the staff’s loving care, showing her sweet disposition and love of affection.

This past fall, Sheena was adopted by the Paduanos, a family of German Shepherd lovers. Robert, the person Sheena has most closely bonded to, was happy to share an update after her adoption.

How is Sheena doing these days?

She’s good. I got her weight down–she was heavy when we adopted her, but she’s at a healthy weight now. And her eyes look good. We’re taking her to the vet on Saturday and we’re going to see if her eye drops can be administered once a day instead of twice a day. Her condition won’t ever go away, but we can manage it. She didn’t see well when she came to the shelter, but the drops have helped enormously.

What brought you to BHS in July, and what drew you to Sheena?

I’ve had German Shepherds since I was a kid. That’s my breed. I got my first shepherd when I was 8 or 9. His name was Max. After Max we got Schultz, who was rescued from being tied to a tree in Vermont. After he died we rescued another shepherd who became homeless when his family broke up. His name was Pharaoh. After he died, we rescued Mia, who was my first female German Shepherd. We had her until she died about a year ago this May.

My wife’s aunt found Sheena online. She was looking for a dog for us. As soon as I saw Sheena, I just knew she was my dog.

How did you know?

Have you ever played basketball? It’s like when you let the ball go, you know if it’s going to go in the net. It’s not conscience. It’s not logical. It’s a feeling. And you just know.

Sheena has a very pretty face. She had a certain look, like Mia had. I responded to that.

We just have the one dog, so she has the whole house to herself. She seems to like that. She likes when people are around too. Sheena is always sure to announce the arrival of anyone before they get to the door.

My daughter, Aria, is 13. Sheena is great with her. Aria has grown up with German Shepherds. She’s been around big dogs since she was born.

Sheena is most bonded to me. She’s our dog, but also my dog. When I get up and move, she follows.

How has your life changed since you adopted Sheena?

It’s really nice to have a dog again. When you lose an animal, your life is different. You have some freedom that you didn’t before, which is the only good thing. But the bad thing is that the emotional attachment is gone. They are a member of your family. Now that Sheena is here with us, I’m happy to have a dog again. Especially a German Shepherd. I like all dogs, but Shepherds are all I’ve had and all I want.

Sheena is more of a lap dog than any other Shepherd I’ve had. She’s the most affectionate. Pharaoh loved to be petted, but he’d let you know when he was ready to have his own space. I’ve never known Sheena to need her own space.

What would you tell adopters about considering a special needs pet?

This story was originally published in our Fall/Winter 2018 Newsletter.